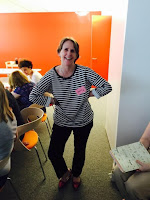 #MyBookBuzz flying around. It has been wonderful and caught a lot of people's imagination. It came from the Book Trust who have a fabulous reading scheme called Book Buzz aimed mainly at Year 7s (the closing date to participate was the today the 21st July). #MyBookBuzz caught people's imagination because they were tagging books that had inspired them to be readers or to become writers when they were young. It was wonderful to see the eclectic mix of books that were appearing on Twitter. It was also really hard. Having only 140 characters to list the books that influenced/inspired you was impossible particularly as everytime you saw someone else's tweet you thought 'Oh yes and that one..two...three.' I am blaming Abigail Tanner for this blog post. She encouraged me to write it when I said I couldn't fit them all in.

As a child, I was a vociferous reader. At times being known to read a book a day. They were my escape. Despite coming from a very large family - I was the youngest of five - there were some quite large age gaps so I had the privilege of having a large family but also spent quite a while as almost an only child. I was very lucky with my sisters and brother doing amazing things though it did mean I spent quite a lot of time on my own. We were forever moving so I never formed any close friendships bar one with whom I am still friends. The books were my friends. Don't get me wrong my childhood was idyllic. I can remember my parents and my sisters reading to me when I was very small. When I was older my eldest sister, who also happened to be one of my godparents, would buy wonderful books for me. I still have the book of poetry she bought me tucked away. Unfortunately, I can't find an image of the book.

The other thing I can remember vividly is being read to at school. Some wonderful stories such as Clive King's Stig of the Dump, Ian Serraillier's The Silver Sword, Nina Bawden's Carrie's War and

Anne Holm's I am David. We would be sat on the carpet at the end of school absolutely enthralled by the stories, hanging on every word. I have just noticed a pattern in the stories I remember the most there and my own story about to be published by Firefly. There is a distinct World War Two theme going on but then both my parents had both lived through it and, my mother, in particular, would regale me with stories of her time as a WRN.

At home, my stories tended to have more of a familiar theme: horses. I was passionate about them. I kept being told that at the next house we would have a paddock and I could have my own. It never materialised lol. This is where I would really live my dreams through my books. I would read Elyne Mitchell's The Silver Brumby series, Mary O'Hara My Friend Flicka and all the stories by the Pullein-Thompson sisters. I would relive the stories in the garden with our poor dog, Henry, who was my pretend horse. He was made to jump various courses I created. Bless him he was very willing and tolerant. I would also devour Edith Nesbit and The Railway Children, Louisa May Alcott's Little Women, and of course, Noel Streatfield with Ballet Shoes. I still dip into it every now and then.

As I got older I moved on to Daphne Du Maurier. I can also remember vividly reading her book Rule Britannia and taking it into school as my current book. This was before secondary school. Oh so precocious! I then have a confession. I think I at some point I moved onto Jilly Cooper...well she did have horses in it ;-). I adored Gerald Durrell's My Family and Other Animals which I had to study for O'Level (yes I am that old!). It lived with me for a long time.  I was also into D H Lawrence. In the Sixth Form we tormented a poor newly qualified, delicious looking English teacher when we were studying Lawrence's Three Novellas, discussing any potential innuendo in minute detail while we watched him blush. 17-year-olds can be cruel looking back.

Books are a joy. Thinking about this post has brought back so many happy memories. They always say music and smell can take you back to a certain moment in time but I think a book can too. Books can be places of safety to hide in, places to find consolation, to find moments of joy and hope. They are places where you can work out who you are, and just as importantly, who you are not. You can ask questions without being laughed at, seeking and finding the answers time and again without mockery. Books are hugs in a page. They are magical.

How about a little bit of Laura Mvula and 'That's Alright!'

Posted by Ness Harbour at 14:28 No comments:

Email ThisBlogThis!Share to TwitterShare to FacebookShare to Pinterest
Labels: #MyBookBuzz, Book Trust, Carrie's War, I am David, inspiration, Laura Mvula, My Family & Other Animals, My Friend Flicka, reading, Stig of the Dump, The Railway Children Ballet Shoes, The Silver Sword

This week I have been doing the edits on Flight that the lovely Penny and Janet wanted me to do for Firefly. I had had a bright idea as to how I could enliven a scene and make it more thrilling but I needed to check that what I was suggesting was viable. I was pretty certain it was, but you know how you always doubt yourself. My book has horses in it and this particular scene concerned the horses again so I went to my Oracle, the ever knowing Imogen Cooper. As always she came back with the most pertinent of questions. 'Yes, it does work, but how come they can suddenly do it? You need to feed something in earlier about it.'

Doh! Of course, I do. I know that. I am forever telling my students and my 'Eggs' that. Don't just put something randomly in. There has to be cause and effect. It is Chekov's if you say there is a gun hanging on the wall in the first chapter then someone needs to be shot by it later in the book. Trouble is when it is your own work it is not always so easy to see or remember that - definitely a case of do as I say not do as I do in this instance. So infuriating. But it was easily fixed after some thought. I was able to add a scene earlier on that introduced the idea, which I think works. Let's see what feedback I get though. Watch this space.

The idea behind cause and effect is it gives your characters a reason or the capability for undertaking a certain action. The reader is going to pick up on these hints, it is like a jigsaw puzzle for them and as they read so the pieces slot into place. They get a sense of satisfaction, enhancing the reader experience. The ultimate for cause and effect is, of course, J K Rowling who sprinkled throughout her stories cause and effect. Hints in the first story that were carried through to the final story. That is true dedication and not always necessary.

What you have to remember to do, and particularly when as I was, adding scenes in when editing later, consider whether you have a reason for this scene. Another way to look at it is has someone dropped a pebble in a pond that caused the ripples enabling this event to happen and what were the implications. Who did they impact on? It might not just be this particular event - who else might it affect? Ask yourself these questions.

In the meantime enjoy your writing this week.

Today's music is a mash up of old dance scenes with Mark Ronson's Uptown Funk Ft Bruno Mars because it makes me smile and I love the way the two the words and pictures match - Not quite a cause and an effect but a good reaction.

Posted by Ness Harbour at 09:34 No comments:

Strangely enough, it was fifteen years ago this September that I went back to university. I had been doing a bit of writing to deal with some disabling illness and I went to university to do a degree in English which I knew had some creative writing modules in because of it. Little did I know it would change my whole world.

Fast forward fifteen years. Last week I submitted an academic book based on my PhD, and this week, I am delighted to announce that Firefly Press are going to publish my middle-grade Second World War, adventure story, Flight, next summer. I am beyond excited as Firefly are the most incredible publishers with some fantastic titles and authors already on their list. I feel very privileged to be part of it.

When I met with Penny and Janet a few months back I really thought I was dreaming. I suddenly realised I was sitting in a restaurant discussing the cover of my novel...that's right MY novel. It felt surreal and as I drove back home I kept having to remind myself that this was for real and someone wasn't going to jump out and shout 'Only joking!'

Flight was the first story I had written outside of academia and it was joyous to have that freedom. I work for Golden Egg Academy supporting other writers, but I was also lucky enough to be mentored by Imogen Cooper myself. I can spot issues in other people's work but it is never that easy on your own. You need a professional to sit down with you and say: have you thought of this or why are you doing that? Her knowledge and understanding of books and empathy with authors knows no bounds.

I also don't have an agent so I did all the negotiating myself. Again I am very grateful to Imogen for her advice but also the Society of Authors, who were incredibly useful. Their advice was invaluable. I cannot recommend being a member enough.

When I started at university I hadn't even thought about being a children's writer. It was only when I had a chance to write some that I suddenly found my voice and realised that's where I felt at home. You see you have to take all the opportunities that come your way.

I am really looking forward to the next few months as Flight literally does take flight...

Somehow this seems quite appropriate: American Authors - Best Day of My Life