A week ago I was preparing for my final viva. The photo is of me immediately afterwards and, yes, I was a traumatised as I looked. Two long hours of interrogation but I walked away having been awarded a PhD (with some minor corrections) after four years of effort.The flowers were from a friend who started her PhD at the same time as me who came miles so she could be waiting outside, an absolute treasure. My DoS came in with me (he has to sit behind me) but prior he did his utmost to keep me calm by bringing a great friend with him, which was a wonderful surprise as she had been such a great support throughout the last year. He also played some music at my request as it kept my mind of what was to come.I owe him a lot. I also owe my children and my nephew a lot as they celebrated with me that night. I seem to be in debt to a lot of people!

But I feel I should be ecstatic but at the moment it hasn't sunk in so I feel more numb than anything. I don't feel like it is real.

I went straight from the viva to a conference which was good if exhausting followed by a day in London with the same friend who surprised me at my viva. We talked lots, laughed loads and occasionally cried some. We saw Ai Weiwei's sunflower seeds and felt humbled, rested in Rothko's room and were enthralled by women war artists at the Imperial War Museum, then cried more at the awe-inspiring War Horse.

But now I am home and back to reality. It has been suggested that this should be the end of this blog and maybe it will be, but maybe it won't. At the moment I am not making any decisions. Instead I need to stop and think 'what next'. When I have made that choice you will be the first to know

In the meantime, here is one of my favourite songs. It is Kate Rusby's I belong to you. It is a theme that has run throughout my PhD but also in my 'past' life where it was a favourite for different reasons. Enjoy, as I love it.

Posted by Ness Harbour at 19:38 No comments:

Always look on the bright side...five days to go...

In a few days it is the final viva of my PhD, the culmination of four years of hard work so I thought I would write my final pre viva post. If I am honest, I had been secretly looking forward to it, admittedly mixed with a fair amount of fear so I was possibly a little complacent. I thought I knew my thesis inside out...and I do if I just chat to someone with reference to it. But ask me a question about the thing and my brain moves out quicker than my ex husband did a few hundred years ago.

How do I know this? I had a mock viva with my very patient DoS who asked me questions and when he did I froze or would manage to answer questions on a superficial basis. I did a great impression of a goldfish as I sat there, mouth opening and closing whilst I prayed that some legible words would come out of it and he looked at me expectantly. If he used the word Foucault (my nemesis you may remember) in the question then that is all I heard. I was a wreck by the end of it and any shred of complacency was dispelled, which is probably a good thing.

Luckily for me my DoS is good on connections and how to make them and how to remember them (wait til you read his new book!) so I have a weekend of connections planned as I refuse to let down the people who have supported me throughout this process so in the meantime, a little Monty Python...

Posted by Ness Harbour at 09:06 No comments:

Why the writing never stops

It was Maurice Blanchot who stated that 'the writer never knows if the work is done' in fact '...the work of art the literary work - is neither finished nor unfinished: it is.' How right he was. When I handed in my novel for my PhD, I loved it and was very happy with the way it had turned out. That was a couple of months ago and this week I went back to it, just to have a read through again before my viva. That was a mistake. I kept finding things that I want to change, whole sections I want to rewrite. How can I like something and be happy with it one moment and feel it is not good enough in the next. At the moment there is nothing I can do about it, other than accept 'it is'.

It made me realise that maybe that is a writer's lot. You spend your life wanting to change anything you have written. It is never finished. It could always be tweaked just one more time. This is not restricted to fictional writing though, it is just as applicable to any academic writing you do. Indeed, any writing - even your shopping list. Face the fact your life as a writer is going to be one long rewrite and edit!

This is a piece called La Serenisssima by Loreena McKennitt. It was given to me by a friend who said it was great to write to...I might do some re-writing to it! 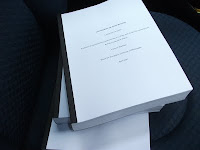 12 days and counting....what's that about eh? It is 12 days until I have to defend the document in the picture at my final viva and I am trying to stay focused when all I want to do is write. I want to escape into made up worlds creating new lives but I can't, not yet. Instead I am trying to keep tight control of my nemesis Foucault and all the other arguments I have in my critical piece. As well as trying to remember why I made the decisions I did when writing the novel part - Ham and Jam. I am being given lots of advice but actually it will all be irrelevant if I can't keep my brain working. When I'm nervous my brain freezes and my mouth fills up with cotton wool as it open and closes like a goldfish. Considering this is a creative writing PhD I can be incredibly inept with words as I try to find the right ones to answer any questions asked - and don't get me wrong, this can be as simple as 'what is your name?'

That's bad enough but am also surrounded by piles of marking which I am slowly plodding through. This work is by my students from the University of Winchester and they deserve my full attention as they have often put their heart and soul into their piece of work so I need to focus on that too.

So between those two pressures I am close to screaming pitch and wanting to throw things out of the window - a real dolly out of the pram moment. It will be over soon enough and I can then do what I am desperate to do, in fact so desperate it almost hurts, I want to be writing again. Does anyone else get that sort of pain? It is like an irritating mozzie bite that needs scratching. I have ideas buzzing around in my head that need dealing with but I keep having to squash them to make sure there is plenty of space for all the stuff I need in the viva. But then...who knows what I will be writing.

Below is a song by Mary Chapin Carpenter entitled I have a need for solitude and that title could have been written for me. It is a song from one of her cds which was part of a collection of cds given to me recently by a good friend who knows what I can be like. They have been my saviour.

Posted by Ness Harbour at 10:28 No comments: