Normandy and all for the sake of a novel 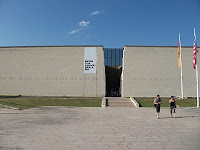 I have just returned from a three day research trip to Normandy. I was research the back ground to my PhD novel and it was certainly worth while. It has given me a huge amount of information/atmosphere all of which will help add that touch of enough verisimilitude to encourage the reader to forget to disbelieve (see and earlier post).
This picture is of the Museum of Peace in Caen. The building appears fractured as that is how they perceive the state of peace. When you walk through the fracture you come into this enormous hall that does a fair impression of either an airport or cinema superplex. It was nothing like a museum. There was no hushed silence and there was a huge aeroplane hanging above you.
It was a seriously well thought out museum. You start by going down a spiral slope which is in darkness apart from the lights of the showing the various items that reflected the period. It was the spiral of descent from WW1 to WW2. When you hit the bottom of the spiral you go into a 'normal' style museum which was all about the 2WW and the destruction, the treatment of Jews and gypsies (Auschwitz) and ending with Hiroshima.
From there you move into various exhibits reflecting the post war world and it was very depressing. The number of conflicts that have occurred since WW2 which was supposed to be the last ever way. This was epitomised by a brilliant film by Jacques Perrin called 'Hope'.
I managed to link in with a school trip at this point. They were a group of year 10 students so not far off my students in my novel. It was very useful to see the interaction between teacher and student as well as student and student. This went well until they lost a student...
This is an example of just one of the many places I visited. The trip has left me buzzing. I have so many notes for my novel. Also an understanding of how I can make some of the work already written come to life. I took masses of photos purely as an aide memoir for me rather than a memory of the trip. I took photos of things that could be relevant to my writing as however we are convinced we are we will remember everything we (or maybe I)don't.
Lesson learnt....don't ignore research. The more in depth the better. Take a chance to explore the world your characters will be living.
Posted by Ness Harbour at 07:37