An itch that needs scratching 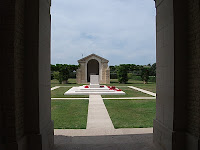 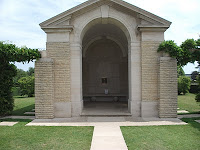 These two photos are from the British War Cemetery at Bayeux. They are central to a chapter of my PhD novel. The character Ben meets a veteran called Finley in the shelter. This chapter will tell Finley's story which helps Ben understand part of his life. I have done a lot of research both on the Normandy Landings and the current war in Afghanistan and it is because of this that I have an itch that needs scratching. All this research is causing the itch, it is demanding to be written.

This chapter doesn't actually need to be written yet as there are at least four chapters before it appears. Does it matter if you don't write in a linear way? I don't think so, writing it now doesn't prevent me from changing it slightly (or a lot) when I get to it. But I think it needs to be done whilst the research and ideas are fresh in my mind. During editing there will always be the chance to spot any inconsistencies or irrelevancies.

I wonder if other writers find themselves doing things the wrong way round?
Posted by Ness Harbour at 11:45