I have had a wonderful week full of events. It has been joyous and reminds me of all the good parts of being an author. The best bit was the chance to be in touch with my audience, with my readers. What was particularly interesting was that in a week I managed to cover virtually all versions of events you could imagine.

On Monday I went into school on the edge of the New Forest where I did three workshops with two Year 7 groups and one Year 8. They were brilliant, so inspired. The workshop was based on the senses and walking in someone else's shoes. Asking them 'What would you do?' in a certain situation. They came up with some great ideas and were very thoughtful in their processes. The school was taking part in the Wessex Literary Festival, so had lots of activities planned. It was good to see when you hear of so many schools no longer inviting authors in.

It was good fun working with Years 7 and 8. I was pleased to see that I was right in thinking that Flight could be used across the board and up to KS3 as well as KS2.

The students were engaged and often, I apologise for the cliche, but they did think outside the box. I enjoyed getting them to think about what they would feel like if they were a child during the Second World War. What emotions they might experience.

Using a variety of items that I brought in, I challenged them also to use all their senses and not just sight when writing. Developing upon the idea of 'show not tell' or dramatisation, where the reader experiences the story alongside the main character. They certainly embraced this, though weren't too keen on the smell of Wright's cold tar soap!!

On Tuesday I had a chance to do a Skype session with Year 5 at Broseley School as part of their LitFest. I felt very honoured to do this as Broseley School is close to my heart as I am their #BookBuddy. You can check out on my website out the photos of the Book Nook they created.

Unfortunately I wasn't able to get up to the school this time for a visit, so instead, we did it via Skype, which was brilliant. We did a Q&A session. The pupils asked some fabulous and original questions. They were obviously well thought out and considered. I confess though, one of them really stood out. The boy who asked it was quite nervous because it could have been perceived as rather a personal question. The class had done their research into me and this boy was intrigued by the fact I was a disabled author. He wanted to know what this meant for me as an author. At the moment, with the drive for diversity and inclusivity, it was the best question ever, as it gave me an opportunity to talk about what it means to be a disabled author.

The pupils were a delight and the Skype worked really well! It was a joy to do. I was buzzing when the call finished because they were so lovely. There is nothing better than working with your potential readers. 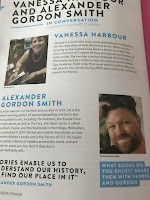 The week ended on a high with a trip up to the University of East Anglia and the Fly Festival of Literature for Young People, organised by Antoinette Moses. It is an incredible Festival, it is a week full of workshops and 'in conversation' sessions. I was lucky enough to be invited by Antoinette to be part of the finale and be 'in conversation' with the Festival's patron Gordon Smith. This was Antoinette's last festival as she retired on the last day too. I felt very honoured to be part of that as she has done an incredible job over the years.

I knew both Antoinette and Gordon via Social Media. It was wonderful to meet them IRL. We sat talking and there were so many laughs. You know when sometimes you meet people and you immediately click, it feels like you have been friends for years and years. It was just like that. The best tonic ever after a difficult few months. I was also thrilled because I had chance to catch up with Melvin Burgess. I love Melvin dearly. His book Junk was the starting point of my PhD and he has been so supportive for many years now. It is always wonderful to see him.

The 'in conversation' was fabulous. Antoinette, Gordon and I sat in front of a group of a couple of hundred young people and chatted about writing, our books, other people's books and inspiration. I always find it interesting talking to others about their writing processes. Here are some useless bits of information I gleaned from these discussions (but I found them interesting):

1. Both Antoinette and I like new notebooks when we starting writing novels
2. Gordon and I are 'pantsers' when we write
3. I like doing research. Gordon doesn't.
4. Gordon wrote a book that barely needed editing, so it was virtually the first draft that was published (I confess I had a bit of writing envy at this)
5. Antoinette and I quite like editing. Gordon doesn't
6. We all love that first rush of a new story

The questions once again from the audience were incredible. One question was 'what would you do if you weren't an author?' I think as part of the answer to that both Gordon and I planned to take a year out to drive super trucks in the US...

This was just one week. Thank you to all involved for such an incredible week. Now I am back home (8 hour round trip in the car) and am writing. I am definitely living the dream as an author. It is the best and toughest job in the world.