Being a published author can be a bit of roller coaster particularly now with social media. Social media is wonderful but it can also be a cruel mistress if you are not feeling on top of your game.
Yesterday, however, as my dear friend and fellow author, Vashti Hardy, so eloquently put it, was a 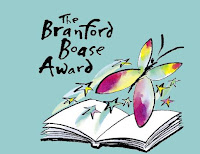 big hug of a day. It was like that for both of us and that was because we were both longlisted for the Branford Boase Award.

The Branford Boase Award is in its 20th year. It was set up to reward the most promising new writers and their editors. It is named after Henrietta Branford, a gifted novelist and Wendy Boase, Editorial Director of Walker Books. Both of whom died of cancer in the 1990s. Walker Books have recently confirmed their continued support of the Award. It is an Award that not only acknowledges an outstanding first novel but also marks the important contribution the editor plays.

This Award means a huge amount to me. Another dream come true. Not only am I thrilled that Flight has been nominated but also that my editor,  Janet Thomas' hard work also gets to be acknowledged. Janet, from Firefly Press, was an absolute joy to work with. This is an Award that I have been aware of for a very long time. My great friend, colleague at the Golden Egg Academy and first editor of Flight, Imogen Cooper won it in 2012 with Lucy Christopher (another friend) and her book Stolen. Firefly's wonderful Penny Thomas won it in 2016 with Horatio Clare's Aubrey and the Terrible Yoot. Fellow Egg, MG Leonard won it in 2017 with Beetle Boy and of course, my hero and huge support, Meg Rosoff won it in 2005 with How I Live Now. This was just as I had begun to write for children and had noticed what was going on in the children's literature world. It is so inspirational to be longlisted for something that Meg won.

I was about to start lecturing yesterday morning when I noticed an email had come through from Janet. I quickly glanced at it and she had forwarded on the email from Brandford Boase informing us of the long listing. It was very hard to remain professional and not squeal. As that came through so I got a message from Vashti asking had I seen the long list as we were both long listed along with another Egg, Rowena House. I had a very quick look at the list to see some incredible books on there. I don't envy the judges their job. I am thrilled and honoured to be on that list. As I said it is yet another dream come true. My watch is broken so I use my phone to check the time while lecturing. Every time I checked the time there was a notice of how many notifications on Twitter there were as the news broke. It was wonderful. Once again everyone was so happy and celebratory. That is the best thing about the children's lit world everybody shares in everyone's successes. I feel very lucky and grateful. Whatever happens next I am a very happy author.

I hope you have a day like ours yesterday that is one big hug. This might be predictable but it needs to be done