The loss of an old friend 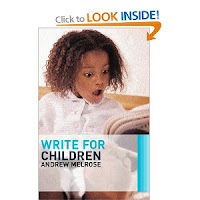 I have lost an old friend. It is not a human friend but a book. Excuse the 'look inside' I couldn't get rid of that. I bought a copy of this book in the first two weeks of my English degree. Back in 2002. I was very new, very unsure if I was doing the right thing and totally over whelmed by it all. Wasn't I bit old to be going to uni? Obviously not as I am still there!
I have no idea why I bought the book as at the time I had never thought of writing for children. Maybe it was the cover or the word 'write'. I had come to uni to follow the creative writing strand through the English degree. Then it wasn't until several weeks later that I had it pointed out to me that it was written by one of our lecturers. Someone who unbeknown to me at the time would also end up having a major influence on the direction my career would take.
I have read this book cover to cover several times. It got me through my final year project of my degree, then my MA in Writing for Children and nearly all the way through my PhD. It is old and tatty. It has notes all over it and if I have a question I know exactly where to look for it. I shall buy a new one but it won't be the same. It won't be my friend. A book that has moved fives times with me, been through numerous family crisis and several all-nighters when I have been trying to finish something.
I have searched my office and my home. Maybe it has had enough, packed its bags and left. Whoever finds it, I hope they treat well and find it as useful as I have. I know AM is about to write a new book which I am looking forward to and will no doubt fill the hole and be equally as useful. But I will still miss my friend.
Posted by Ness Harbour at 19:26