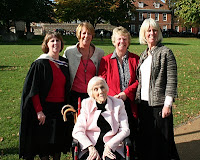 This is the woman who gave me life and lost her own fight for life on Saturday 10th April.

I have added this again as I started it so long ago I couldn't get it to come up where I wanted it to.
She was a strong character with a sharp brain. When she was tiny she was given a live baby penguin for Christmas. She came from a family who built a lot of Croyden and had a mother who worked for the speaker of the House of Commons. She danced almost from the moment she walked. She was sent to school in Belgium to stop her wanting to be an actress...she never stopped wanting that.
During the war she was a naughty WRN, thrown over fences when she was back after curfew amongst other things. Handed out sweets and cigarettes to all the soldiers the night before the D Day landings. She saw things people shouldn't see. She refused to marry someone because he was too high class. But then married someone she loved dearly and her parents didn't approve of. She acted in a film with Laurence Olivier briefly. She and my father knew how to party with a variety of people some famous, some not so but all good friends to them. On her 60th birthday she and my father decided to go to Brighton Nudist beach, just because they could and because they had never done anything like that before. Good thing her birthday was in July. These are just a mere taster of the things my mother got up to.
She did her bit to populate the world as there are five of us, fifteen grandchildren, six great grand children and three step great grand children. She was a very special woman to us all and we will miss her but we do have to make sure our lives are as full as hers was.
Here are a selection of her favourite pieces of music. She loved singing.

another two, one that was very much of her time and one that epitomises how she felt about music.

and one of her favourite hymns